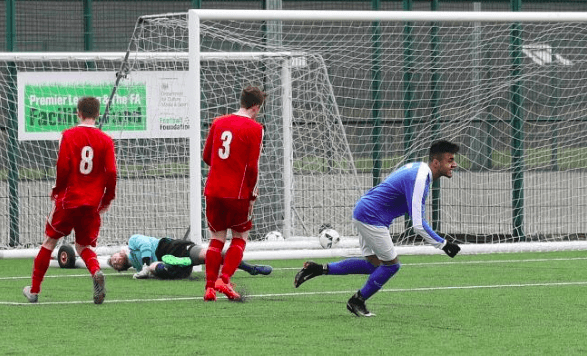 ATHLETICO made it two wins on the bounce as they cruised to a 4-0 win at Leeds Medics & Dentists in Yorkshire Amateur League Supreme Division.

The hosts went close several times in the first half but the Bradford side took the lead after 38 minutes with their first real chance.

It came thanks to a well-directed header from Izat Ghaznewal which keeper Tim Griffiths got a glove on but couldn’t stop.

With keeper Haroon Tariq making some good saves, Athletico led 1-0 at the break and they clinched the points with three goals in 20 minutes in the second half.

Route One Rovers, whom Athletico beat the week previously, drew 2-2 at home to Alwoodley.

Shoaib Iqbal put Rovers 1-0 up from the spot by the interval, only for the visitors to level and then take the lead in the 75th minute following a keeper error. But Haseeb Ahmed restored parity to ensure the spoils were shared.

Third-placed Calverley closed the gap on second-placed Littletown with a 6-3 home victory.

They raced into a three-goal lead with a superb first-half performance as Matty Wilson (2), including one from the spot, and Lewis Waddington found the target.

The hosts led 3-1 at the break and, though Littletown reduced the deficit further, Calverley responded with further goals as Waddington struck twice to claim his hat-trick and Adam Slater also registered.

Calverley’s win did leaders Farsley Celtic Juniors a favour, with the Celts on cup duty in the

The Bradford Academy-based side were locked at 1-1 at home to Whitkirk Wanderers reserves midway through the second half – after Said Osman had put them in front – before goals from Andy Cooper (2), including a free-kick, and Danny Lyons eased them to a 4-1 win.

Wibsey came from 3-2 down in the Premier Division to beat Morley Town 5-3 in a goal-fest.

The Bradford side went 2-0 up thanks to goals from Ethan Labad and Danny O’Donnell, only for the visitors to strike three times in a devastating five-minute burst just before half-time through Jovan Kioseff, Kevin Mackay and Greg Robinson.

But Wibsey regained their composure in the second half as Ethan Lee stabbed home to equalise.

Labad scored his second from 20 yards and, after a fantastic save by Ryan Hall kept the hosts ahead, Jordan Northin headed home to seal the points.

Jack Duncan bagged four goals for Middleton as they put St Bede’s to the sword in a 6-2 home win. Richard Harris and Jermaine Moyce netted for Bede’s, who were disappointing on the day.

PFC romped to a 5-1 success at Ealandians reserves in the Championship as Kashyff Akmal, Abdul Ghaffar (2) and Mohammed Hassan Jnr (2) were on target.

Idle let a 2-1 lead slip as they went down 3-2 at Leeds Medics & Dentists reserves. Leeds took the lead before Aaron Irving levelled but the Idle striker suffered a suspected hamstring tear, which seemed to take the wind out of their sails.

Despite this, Lee Hargreaves put them in front with a superb curler but Medics fought back and bagged a contentious winner.

In Division One, below-par Fairbank United got away with a 3-2 win at home to bottom club Farsley Celtic Juniors reserves.

Farsley led 2-1 before it took two 18-year-olds to bring Fairbank back into the game as Abdullah Lone put Imam Mirza through with a wonderful pass. Imam poked the ball past the keeper, allowing Arsalahn Ramzan to stroke home into an unguarded net.

Then in the dying embers of the game, a free-kick from Hassan Iqbal caused panic in the Farsley area and Mahmadu Damba claimed the winner.

Tyersal moved to seventh after a 4-4 draw at home to Lepton Highlanders, with goals from Kenneth Erhabor (2), Chris Gibbons and Owen Thomas Greaves.